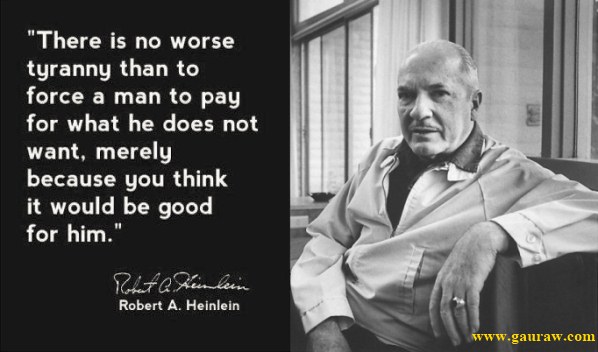 There is no worse tyranny than to force a man to pay for what he does not want merely because you think it would be good for him.
~Robert A. Heinlein, (The Moon is a Harsh Mistress)

About Robert A. Heinlein

Robert Anson Heinlein(1907 – May 8, 1988) was an American science fiction writer. Often called the "dean of science fiction writers", he was one of the most influential and controversial authors of the genre in his time. He set a standard for scientific and engineering plausibility, and helped to raise the genre's standards of literary quality.

Robert A. Heinlein, four-time winner of the Hugo Award and recipient of three Retro Hugos, received the first Grand Master Nebula Award for lifetime achievement. His worldwide bestsellers have been translated into 22 languages. Here are the list of some of his most famous work:

The Conversation Has Started...Mind Joining?