Overcome To Become – Story Of A Butterfly

A little boy was playing outdoors and found a fascinating caterpillar. He carefully picked it up and took it home to show his mother. He asked his mother if he could keep it, and she said he could if he would take good care of it. 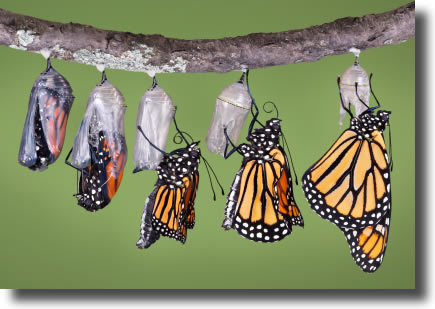 The little boy got a large jar from his mother and put plants to eat, and a stick to climb on, in the jar. Every day he watched the caterpillar and brought it new plants to eat.

The little boy was thrilled to hear about the changes his caterpillar would go through. He watched every day, waiting for the butterfly to emerge. One day it happened, a small hole appeared in the cocoon and the butterfly started to struggle to come out.

The boy was so concerned he decided to help. He ran to get scissors, got it and and then came back. He snipped the cocoon to make the hole bigger and the butterfly quickly emerged!

The butterfly spent the rest of its life crawling around with a swollen body and shriveled wings. It never could fly…

What the boy in his kindness and haste did not understand was that the restricting cocoon and the struggle required for the butterfly to get through the tiny opening were nature's way of forcing fluid from the body of the butterfly into its wings so that it would be ready for flight once it achieved its freedom from the cocoon.

Sometimes struggles are exactly what we need in our life. If nature allowed us to go through our life without any obstacles, it would cripple us. We would not be as strong as what we could have been.